The Glove and the Lions by Leigh Hunt seemed an apt choice for my poetry post this month, a ‘fit’ with my theme of ‘Kings and Queens’. There are after all, two kings in it–King Francis whose realm Hunt takes us to, and the lions, kings of their own realms, though in the human arena, they are mere prisoners, at the receiving end of much ill-treatment, and objects of ‘entertainment’ for their captors, rather than living beings.

The poem by Leigh Hunt immediately transports the reader into a world back in time, a world of kings, queens, and knights, of chivalry and courage, but also of things that weren’t the best part of that world. The poem is set in an arena, where a battle between lions has been organised, to ‘entertain’ the court, with King Francis, ‘a hearty king‘ who ‘loved a royal sport‘ sitting down to watch among his nobles, who include the Count de Lorge and the ‘one for whom he sighed‘.

Picture: Pompeii: Battle at the Amphitheatre

The scene down in the pit below may well have been a ‘royal sport’ but even picturing it in one’s mind, and the image that Hunt’s description conjures up, for me is very much like the Roman arenas–and while there aren’t any gladiators here,  animals are being made to fight each other, and there is obviously pain, and injury, and in all likelihood (though not explicitly mentioned) blood. These five lines of the second stanza that describe the scene down in the pit, bring alive the sights and sounds that one would have witnessed and heard–the blows, the thunderous roars, the sand, and froth–taking us right there amidst King Francis and his nobles.

“Ramped and roared the lions, with horrid laughing jaws;

They bit, they glared, gave blows like beams, a wind went with their paws;

With wallowing might and stifled roar they rolled on one another,

Till all the pit with sand and mane was in a thunderous smother;

The frothing foam above the bars came whisking through the air;”

Painting from the Amphitheatre: Man with a Lioness

Thinking about this scene makes one wonder what pleasure human beings could possibly get or what makes them get any pleasure from watching others (human or animal) fight each other, cause each other hurt–what makes them ‘enjoy’ others’ suffering? And is fighting the only way might or superiority or strength can be proved? And why really does it have to be proved?

But of course, the role of this scene in the arena in the poem is very different, probably not so much intended to make us reflect on humans and blood sport but more to set the scene for that other aspect of human nature that the poem is really talking about–vanity, supposed glory–valued by so many above feelings that really matter in the end. The scene down in the pit, the roaring lions, the froth, and blows are simply meant to convey the danger down below, King Francis remarking at the end of that second stanza, “Faith, gentleman, we’re better here than there“.

Count de Lorge’s beloved (we aren’t given names) however, seems to think otherwise, or at least value other things much above the love the Count has for her, for she has no qualms asking ,or rather quite literally challenging de Lorge to go down into the pit by throwing her glove down there, asking him to ‘prove his love‘ and bring her ‘great glory‘.

“She thought, ‘The Count my lover is brave as brave can be;

He surely would do wondorous things to show his love of me;

King, ladies, lovers, all look on; the occasion is divine;

I’ll drop my glove to prove his love; great glory will be mine.” 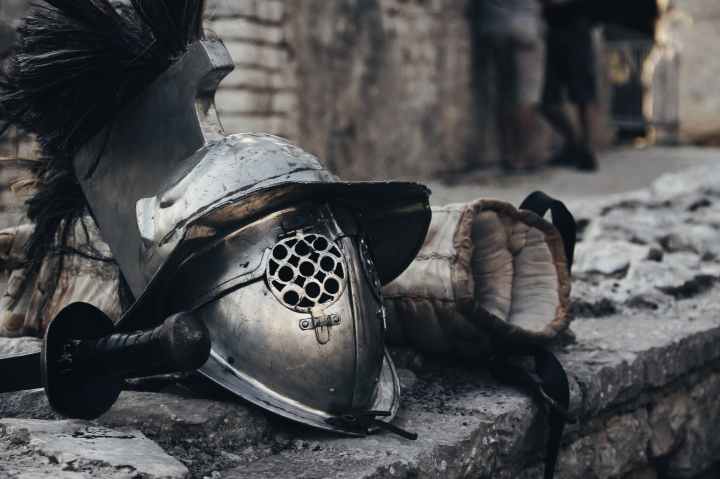 And so she does. de Lorge is not lacking in valour, certainly and immediately as he receives her ‘challenge’, not expressed in words, but simply conveyed by a look and  a smile, he unhesitatingly and in a flash jumps into the pit, and retrieves her glove. But, wait! things do not quite turn out quite as the lady had envisioned. For the Count is not only brave but able to see the lady’s action for what it is. So fittingly,

“He bowed, and in a moment leaped among the lions wild:

Then threw the glove, but not with love, right in the lady’s face.”

The spell the lady has held over him thus stands broken, for while he might have loved her, she seemed to love glory more, and ends up receiving just the response she deserves. King Francis approves his Knight’s action:

So while Leigh Hunt takes us into the world of long ago, of knights and kings, of valour, chivalry, and of ‘royal’ sport, what he’s really showing us is human nature, leaving us with a couple of thoughts that make us question why we consider ourselves so very superior to other life, when we derive pleasure, even glory, from causing pain or danger to others (human or non-human); how we can claim to be ‘civilised’ when such (or at least some form of) blood sport continues even today; how we can claim to be ‘better’ than other creatures when all we value much of the time is fame, glory, (wealth), and power?

7 thoughts on “Love, Valour, and Some Reflections on Human Nature”